Sorry, can't remember if we already had a thread like this for Issue 3.

We had the planar druid art somewhere. At least some sketches.

Also, do we still want to use Axis now that it's a major planar city in Pathfinder? Or is that the city the article is supposed to be about?

The city can be renamed. The main notion of the place was that slavery was legal, artists were persecuted, there was a joint Guvner/Mathematician college, and that if a body stayed too long, they started losing time/slipping away into the monotonous routine of the place (at least, they did if they spent time outside the college). Oh, and it was built along a screw-axle connecting two of one of Mechanus' gears, with a gravity-flip point at the center (where the college resides).

So what's the workflow? I have some ideas for some of these articles. Just drop them in this thread or what?

That sounds good. Honestly playing this by ear.

Allright, so here's one thing for Mechanus druids, namely a more flavorful Summon Nature's Ally for Mechanus. It's going on the old 2e rule that summonings on an outer plane can only pick up creatures native to that plane and bordering planes. I've edited it slightly from the version on the old site.

Edit: I'd also like to include gear spirits and moignos on this list, and possibly parai, but conversions of them would probably be a good idea in order to put them in the appropriate level.

Divine spells allow summoning of creatures from extremely distant planes, and a druid on Mechanus can, if they wish, take the usual Summon Nature's Ally series of spells. For more flavor -- and a list of creatures more likely to receive a warm welcome on the Plane of Law -- a Mechanus-based druid may, with approval of the GM, say that their druidic tradition makes their summoning spells attractive to a slightly different collection of creatures. They lose some entities from the standard Summon Nature's Ally list and gain others not found on that list. These spells might be noted on a character sheet as Summon Mechanus' Ally of the appropriate level.

The following creatures come from elemental planes or planes with alignments distant from Mechanus on the Great Wheel. They are not available at all to Summon Mechanus' Ally:

The following options are modified:
Level II and up: Elemental. Elementals summoned on Mechanus are pseudomentals, animated portions of the plane's spiritual (rather than material) essence. Unlike standard elementals, they are lawful and have the corresponding alignment trait.
Level III: Eagle, giant; Owl, giant. These creatures are N or LN when summoned on Mechanus.

The following options become available to a druid replacing Summon Nature's Ally with Summon Mechanus' Ally, even when casting on the Prime or an Inner Plane:

* Summon Mechanus' Ally can summon a Resolute version of any natural animal from the standard Summon Nature's Ally list available to a given level. See http://www.d20pfsrd.com/bestiary/monster-listings/templates/resolute-cr-0-or-1 for details on this template.

** Axiomites, formians and modrons require Bluff checks if a summoned creature is to properly emulate the telepathic presence necessary to convince other members of the race that a summoned version of a member of their race is real. Axiomites are a PFSRD creature. For modrons, refer elsewhere in this issue. Retribution is never taken on account of mere summoning -- the spells are designed to convince the creature to serve -- but a spellcaster who loses a summoned hierarch modron to death, causing it to take a day before reforming, is likely to face repercussions from the inconvenienced modron race.

*** A "planar native" is a living mortal humanoid or petitioner native to Mechanus. The result of this summoning is a base creature without class levels and only basic equipment, such as clothing and mundane weaponry. Higher levels of Summon Mechanus' Ally can summon advanced planars and petitioners roughly matching the summoner's desire; a suggested guideline is 1 HD per level of the spell.

**** A blink dog with 4 levels of Monk and a monk's belt. The style requires selecting Stunning Fist and Combat Reflexes, and trains Wisdom for the 4th-level improvement. The monastery is almost certainly somewhere on Arcadia, but must be quite reclusive.

The links to Jenx's art are still all up in the Planar Druids thread on the mimir mirror of the old forum. I'm not sure if he's still around and still wants to contribute his art to this project, though? I could message him on Tumblr, if you guys want.

He posted the following:

I'd say definitely message him - art assets are really valuable and he might appreciate the exposure.

I'm also thinking interviewing artists each issue, and providing a link to their other work, might be a good idea?

Increases the incentive to help with art.

What do you think about this Modron/Mechanus-riddle by Elda King?
If he's fine with it, this might fit very well for the Issue.

Nice! I would be down for including it.

He was online three weeks ago. I'll send him a PM.

Jep, he'd be thrilled to see it included.

I have a friend willing to do a black/white ink sketch for the zine. Any recommendations on what we need for art?

Hmmh, Anetra's list probably covers most of it. We also still need a Front Page illustration, don't we? A Parai would be cool. 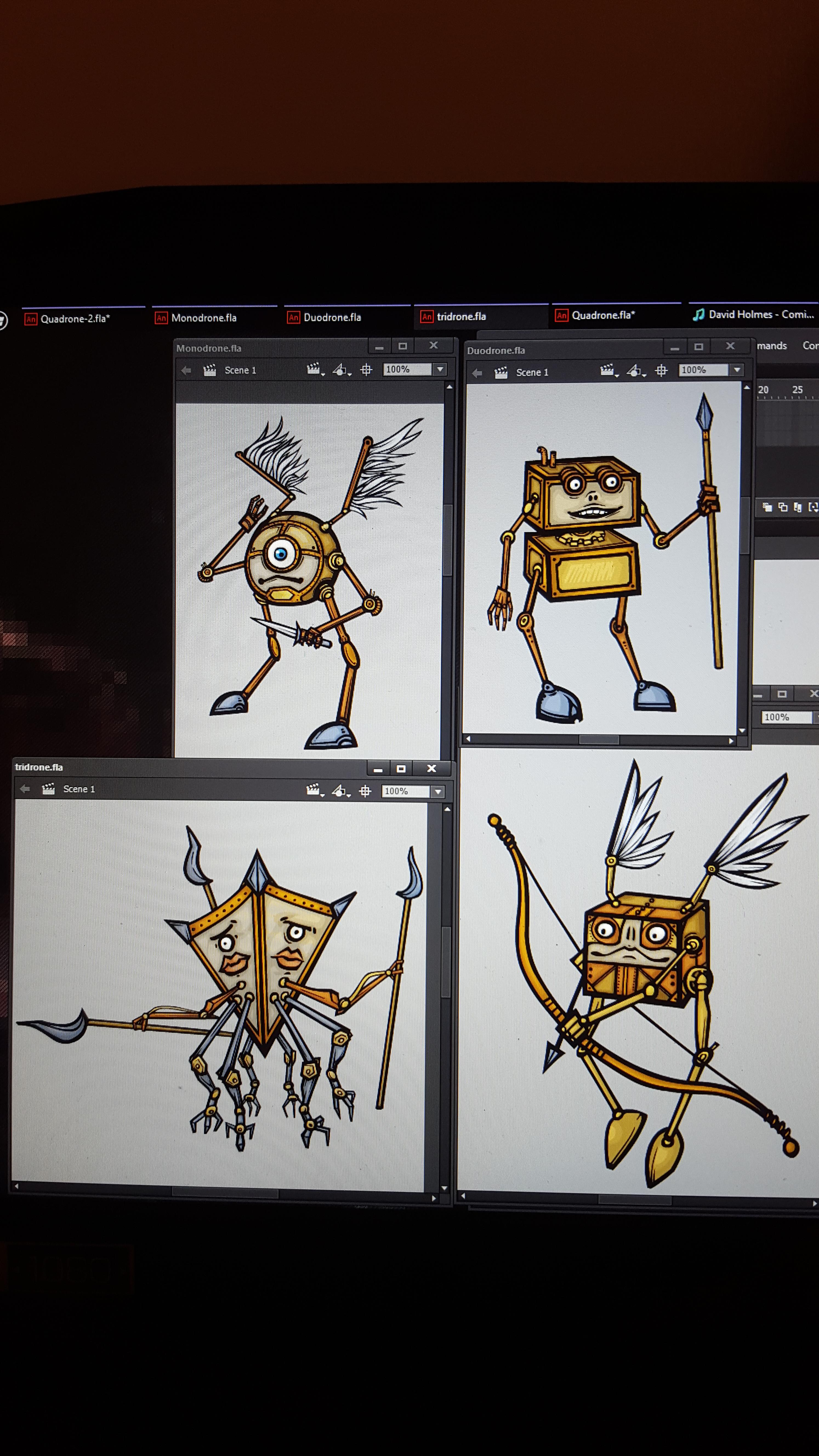 Sorry for the weird image quality. This is where I'm at creating modron paper miniatures to include with the issue.

I'm hoping to have the following done for this issue:

Other resources:
* paper miniatures (previewed above)

I can also do cover art and art for the guvner Archetype if necessary.

I can get b/w ink art for any remaining pieces that need to be done, just let me know what they are - looks like Axis and Planar Druid to me.

I was thinking we'd republish Issue #1 again, along with Issue #2 early next year. I want to retitle the Killing The Lady of Pain article in Issue #1 to better reflect that it's not statting her out nor does it promise any of the means will work.

Can you remind me what all was in Issue 1?

What do you have in mind for a publication date?

If we're going ahead with it, I'll get to work on some layout work and logo design so we can have it look a bit spiffier, and I'll see if I can get a sheet of appropriately themed miniatures done for it.

Here are the contents of Issue 1:

Feature Article
Killing the Lady of Pain: Part 1
by Sciborg2

Log X
Adventuring on the Prime
By the planewalker boards