Today I visited the Norman Rockwell Museum in Stockbridge, Massachusetts (right on the NY State/MA border). They currently have a display dedicated to Tony DiTerlizzi, running through May 28th. Tony makes his home in Amherst, MA and has listed Rockwell as one of his influences, among many others. It's less than an hour away for me, so the wife and I took a Sunday trip out there to take it all in. There are 3 rooms in the display, including his Spiderwick material, the Search for WondLa, various other projects, and OF COURSE his D&D/Planescape stuff.

I had thought I'd seen just about every work he's done, but there were several that were new to me: Portrait of a Tiefling was very impressive. Also some old school sketches of a displacer beast, as well as several recreations of old Monster Manual classics.

There were also several personal effects, doodles and so on, under a glass case. One was a leather sketchbook that I took to calling "the Grail Diary", a Yoda character sheet and some giant AT-AT walkers. But my favorite was an ancient D&D character sheet scrawled on some notebook paper for a PC called Nermal: the elf magic user, complete with accompanying illustration. There were also interactive video displays that went into greater detail about his life, works, and influences. In the shop I snagged a limited print (500 copies, there will never be more) of a small sketch pad that contains even more prints that are new to me.

All in all it was a pretty fun time. It took about an hour to go through the whole display. So if you're in western Massachusetts/Eastern NY in the next ~2 months, consider checking it out. The woman at the register mentioned he visits there for signings and such if you want to sync your trip up with that, I imagine that info is on their website. 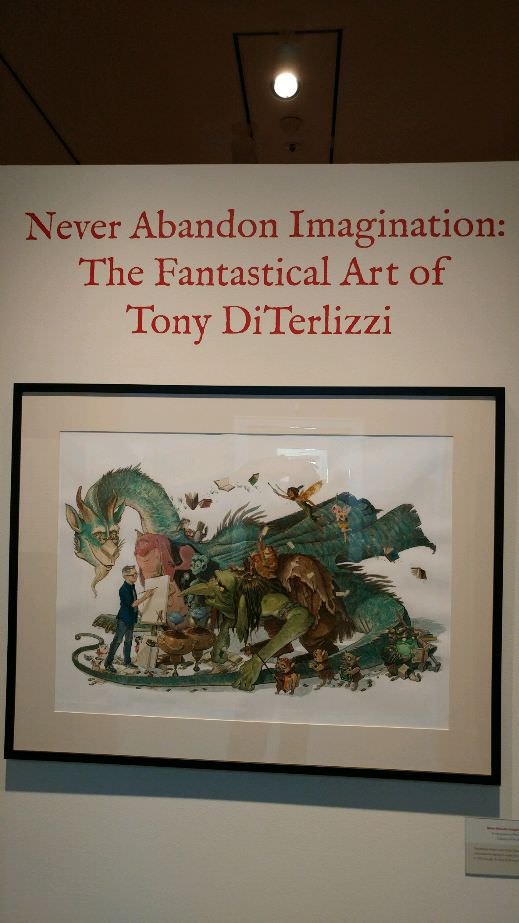 I forgot to mention, I took several pictures while there if anyone is interested. I planned to put a few in the previous post, but I see this forum won't take them directly from my hard drive, I just need to find somewhere to host them first. Any suggestions? I have an ancient Photobucket account, but haven't logged into it in years and would need some investigating to recall my Username/PW.

*EDIT* Just made an Imgur account and will add some pics as I get it organized.

Ok, here are a few of my (terrible) pictures. I was in a rush taking them, not because it was illegal or anything, I simply was moving from room to room of the display, geeking out at each new surprise. So please excuse the glares, reflections, poor angles, etc. I was going to try to crop some of these up nicely, but... well what you see is what you get.

Here is Tony's D&D sketchbook, which I took to calling "The Grail Diary" 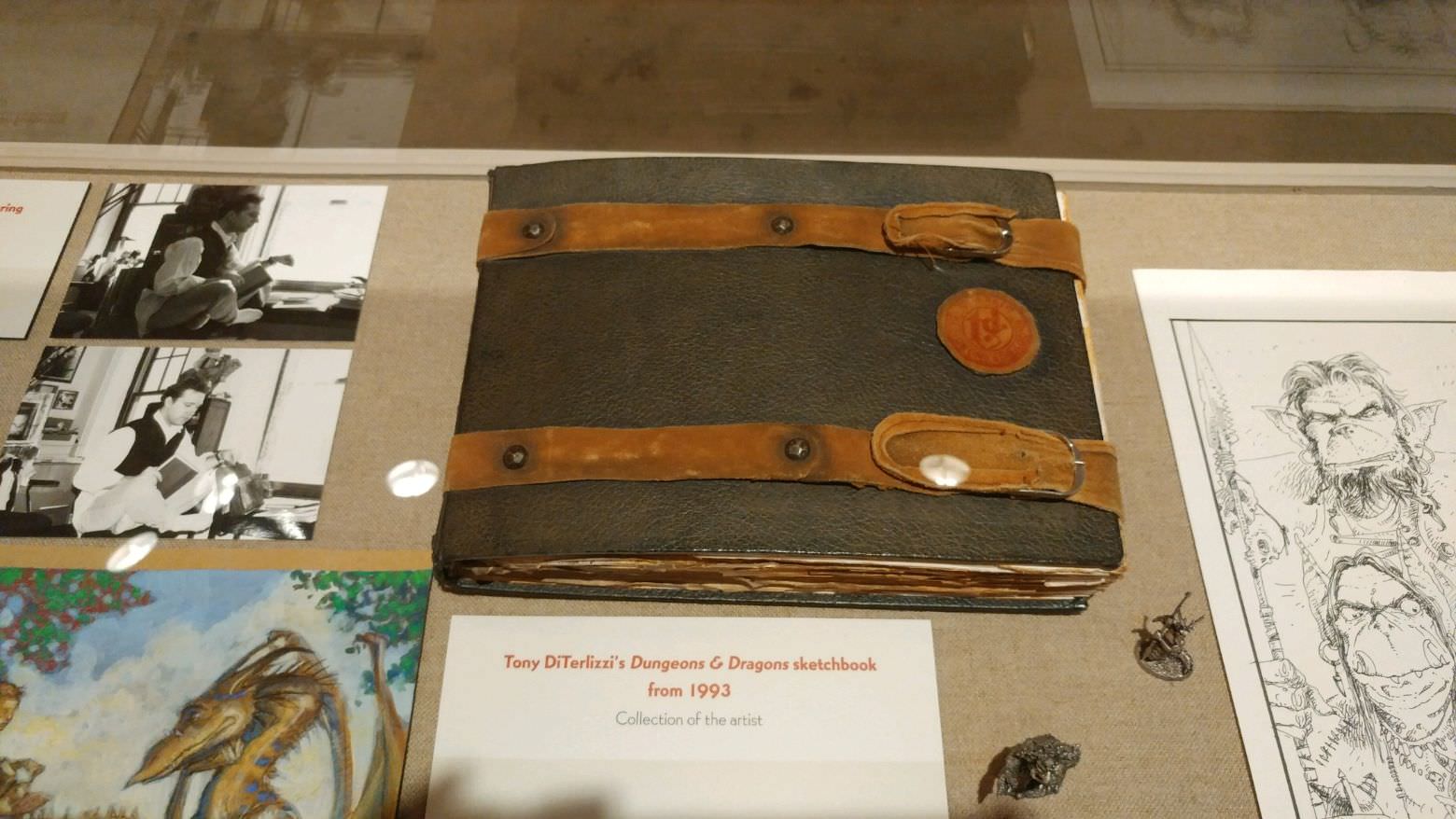 To the right of that sketchbook is a picture of several various goblinoid types. DiTerlizzi had submitted two rounds of drawings to TSR in 1992 and was denied twice. Finally, his third submission earned him a grudging freelance assignment. 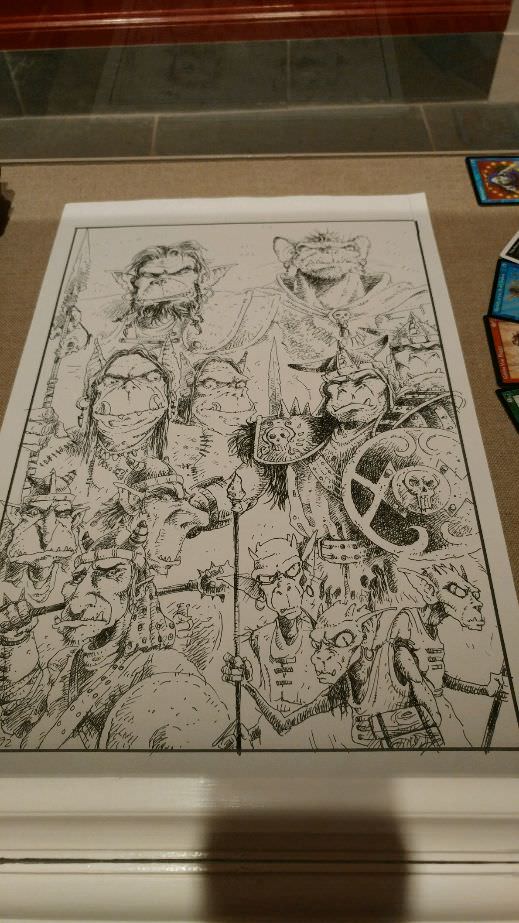 This case had a lot going on:

Top Left corner has two Star Wars pieces - the huge AT ATs seen on Hoth, and a character sheet for Mr. Yoda himself.

Top Right is a plant, and several "card" sized sketches (upside down) of classic beasties from the old Monster Manual - troll, owlbear, etc.

Lower Left is a cover for a Cheshire Cat book, you can see the smile sideways.

Lower Right is a dungeon map of some kind, as well as a character sheet for Nermal, the Elf Magic User, including a pic that looks very much like Jon, the owner of Garfield. I think I might go back to that photo and zoom in/crop the sheet itself for its own image. 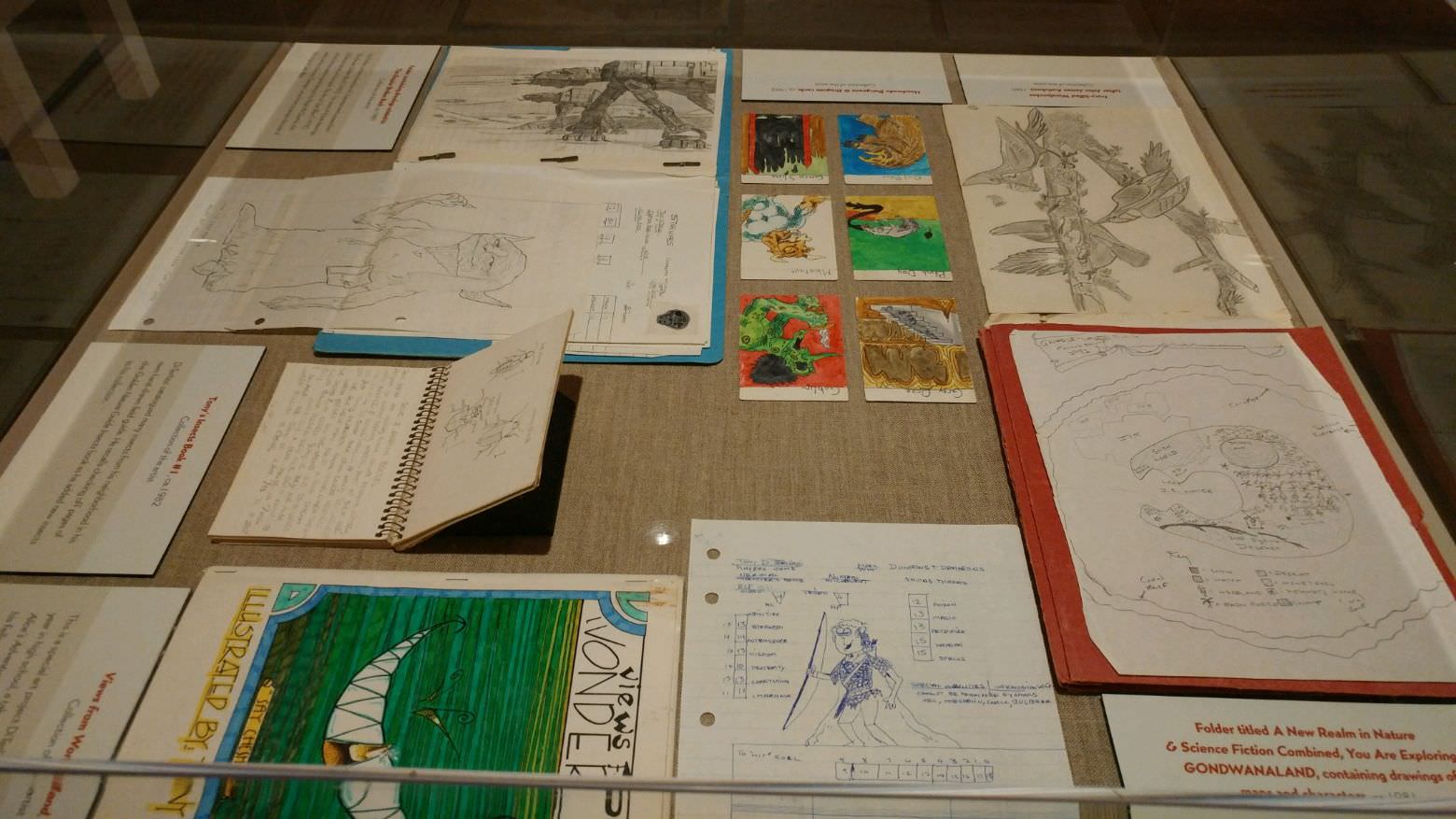 Some old faction classics (I love how he does armor), as well as I believe Charon, the Styx boatman in that PS monster supplement. Notice the picture of the female model in the lower right corner. Look like anyone familiar? [Hint: see 2nd picture below]
-
-
- 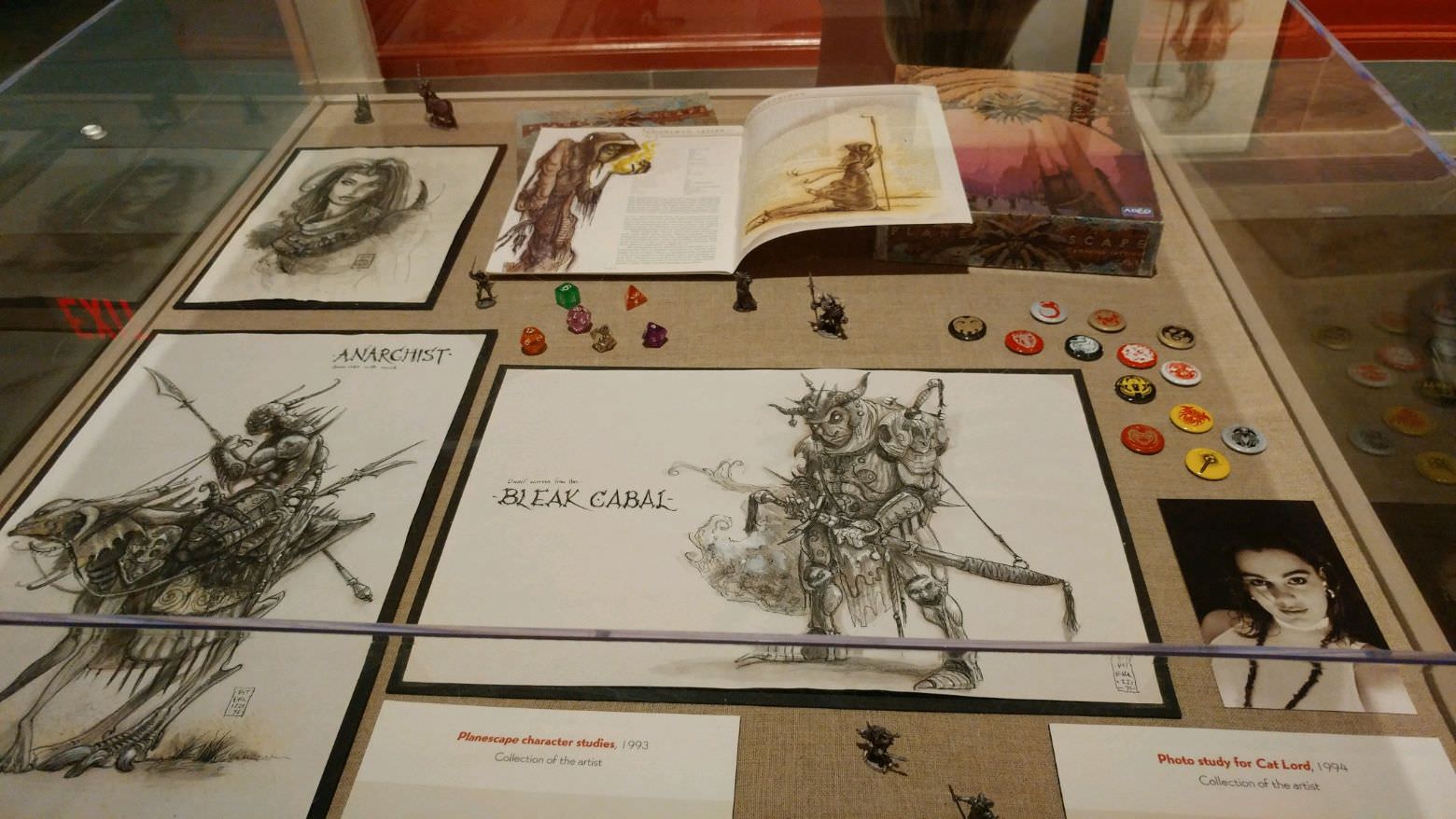 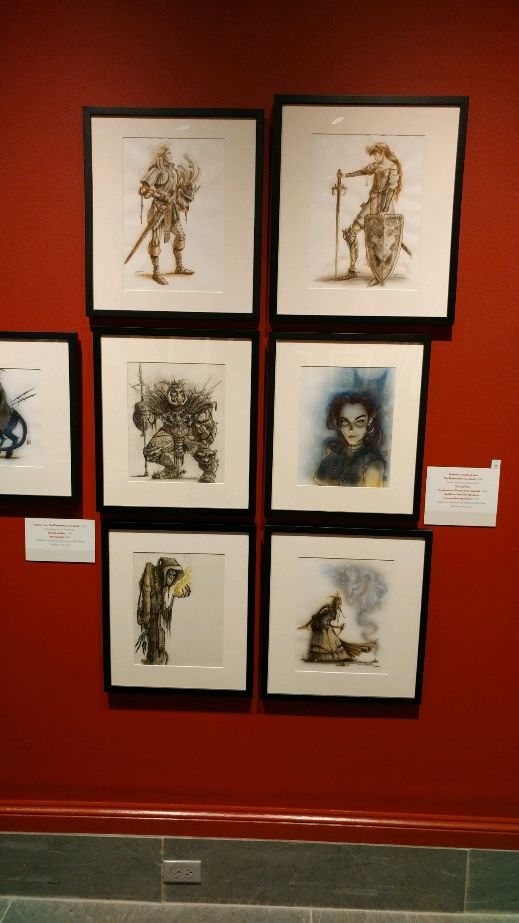 Here is an image I was not familiar with. Terrible glare/reflection on this one, sorry for the janky quality. But if you google the title of this post you can find the original easily enough. How adorable is that baby displacer beast!!! 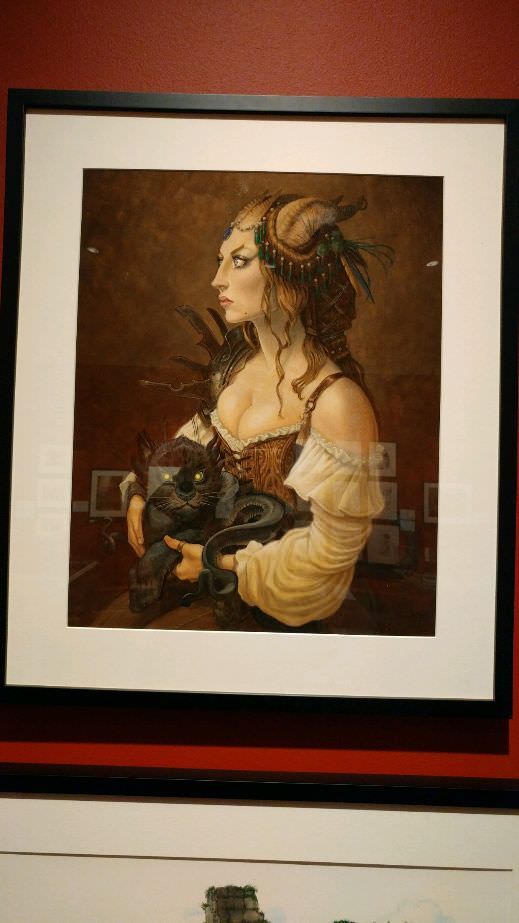 And.... speaking of displacer beasts, here's a cool one in a totally different style than what we're used to seeing from Tony DiTerlizzi. Looks like he felt like goofing around with a different aesthetic: 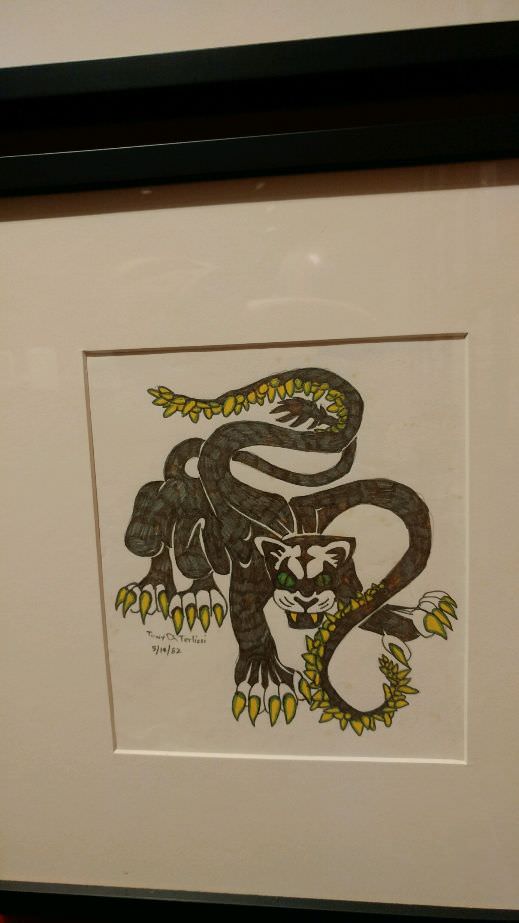 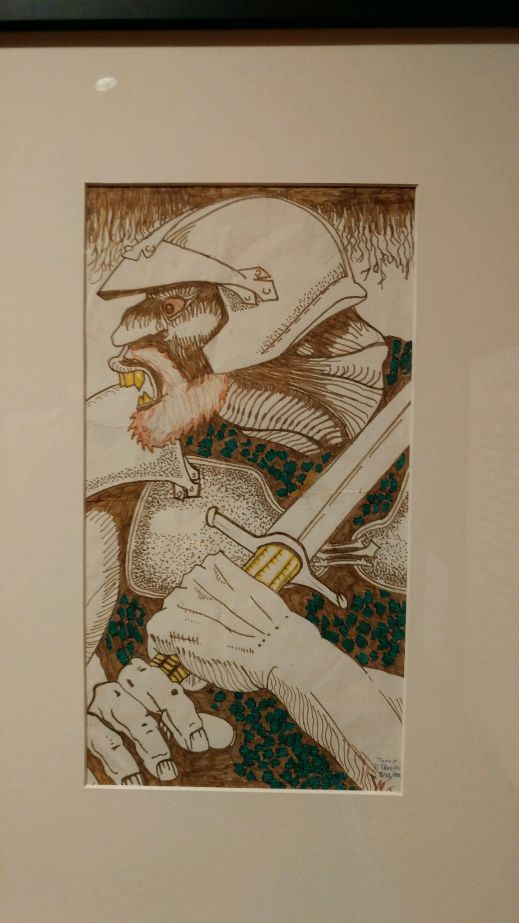 This was always one of my favorite TD images (bad focus): 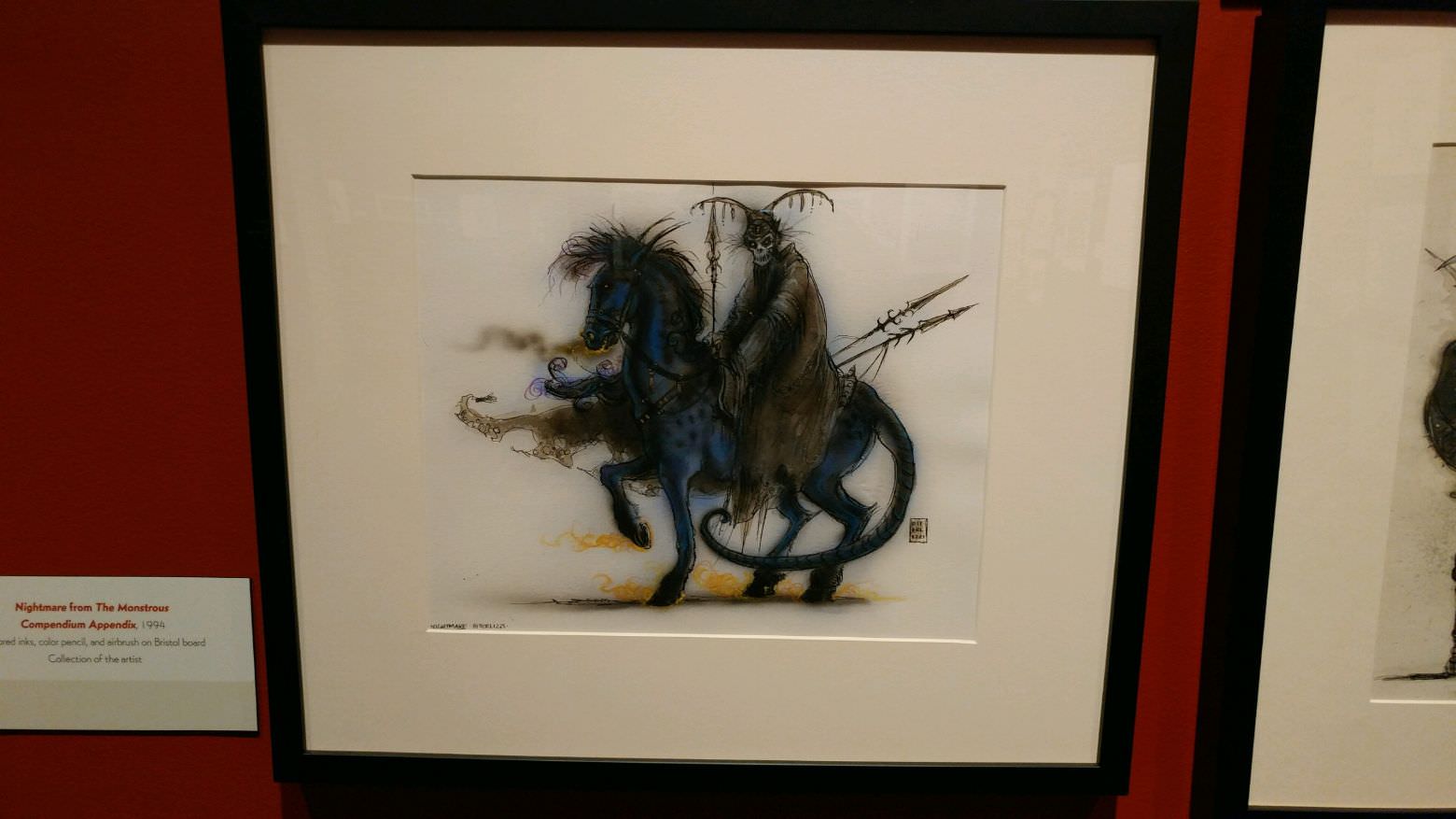 I can't say I recall where either of these are from. The top one is familiar to me, the bottom.... not so much 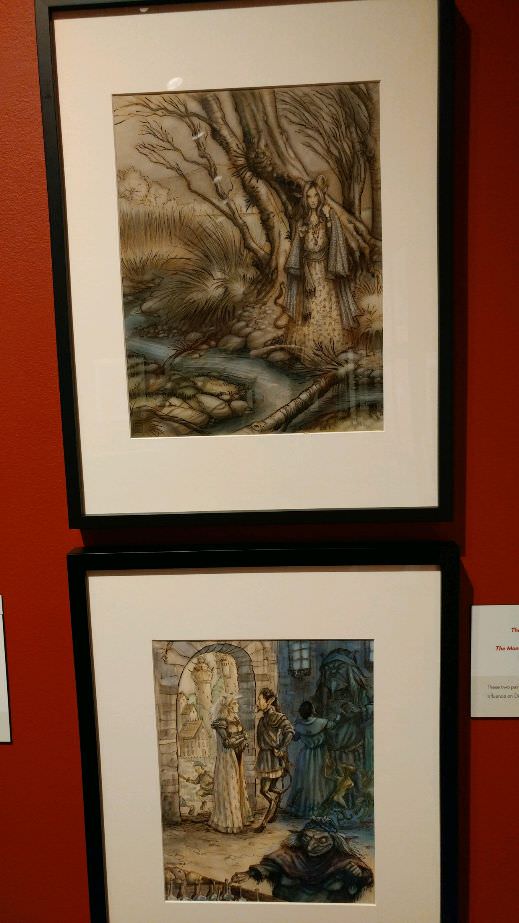 Another model to drawing conversion: 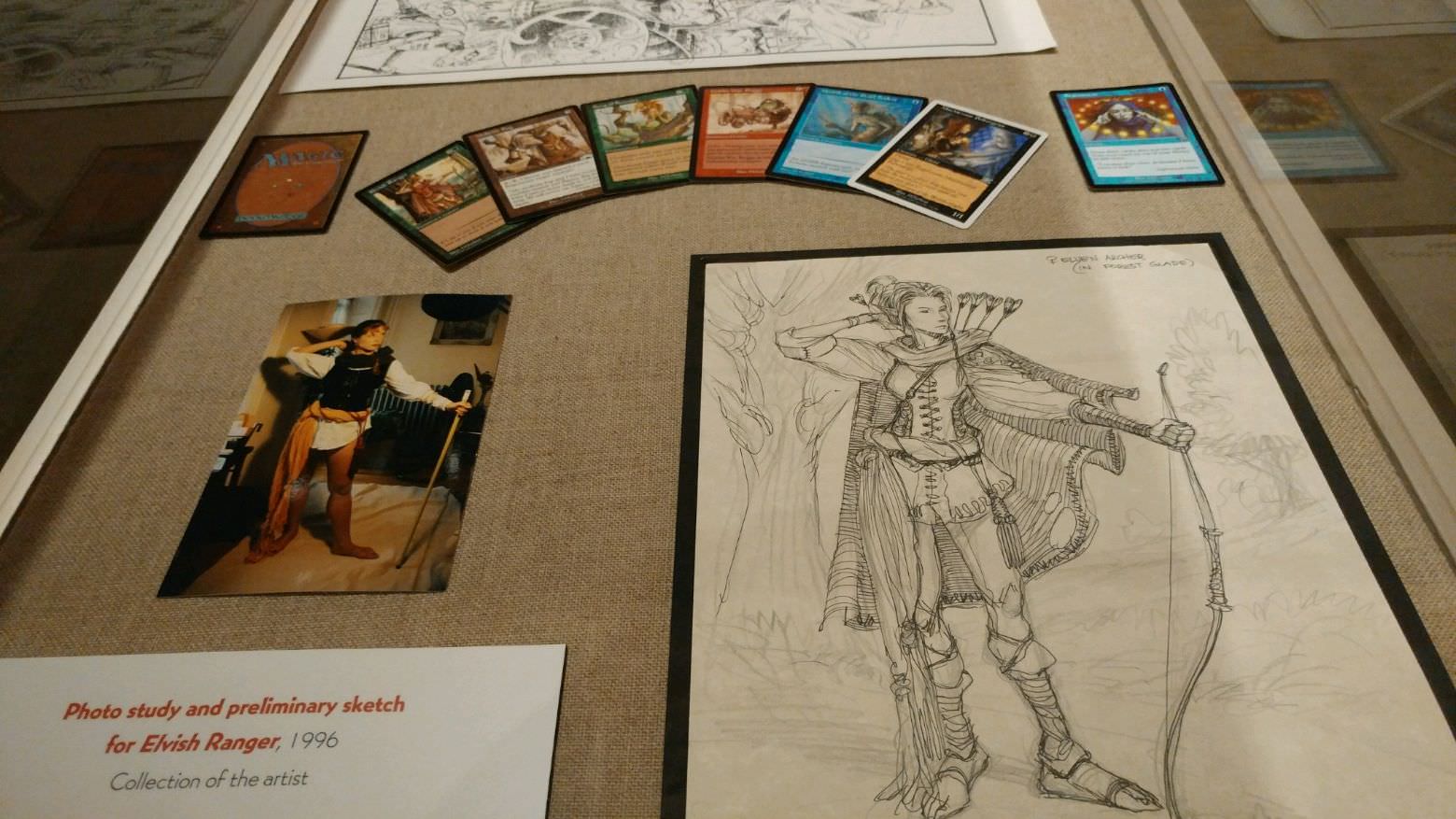 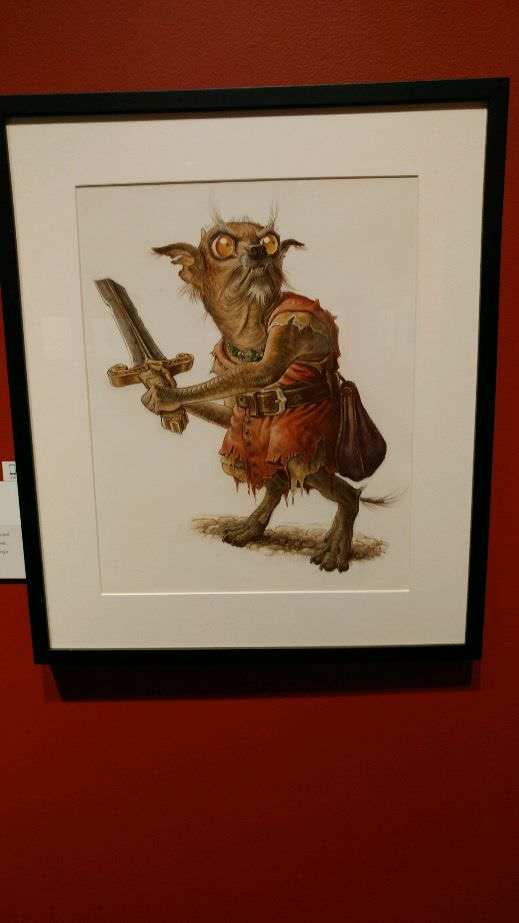 I have one more image, but it's just the sketch that would later become the beautiful cover of Dragon magazine, the one with the boy wizard playing chess against a dragon. It's probably the worst quality pic of the bunch (and that's really saying something!) so I didn't upload it.

But that was just one room of the overall display at the Norman Rockwell museum. There was a room dedicated to the Spiderwick material, something called The Search for WondLa (a sci-fi story), another room for the Spider and the Fly, one for Jimmy Zangwow's Moon Pie Adventure, as well as several other projects he's worked on. I knew he moved on from D&D and hit it really big with Spiderwick, but I had no idea he had so many other side projects. It was a blast to see all his work, as well as watch the video clips in the interactive displays. My only lament was I didn't do a little research and time it out for a weekend where he makes an appearance, it would've been fun to meet him and chat a bit, if only for a minute or two.

In post #11, the photo on the bottom that you're wondering about is in the Player's Handbook, page 79, in the "Races and Archetypes" section. It's almost certainly a tiefling talking with an aasimar in Sigil.

However, I can't place the top one immediately. Where is that from?