Seems sorta Planescape-ish, and it's by Monte Cook, so figured it might be worth a thread promoting it.

Some interviews where people from MCG talk about the game:

More info on their site here:

Monte Cooke Games on what has been revealed so far:

"This is a quick summary of much of what has been revealed about Invisible Sun. We will update this article as we post updates with more information."

Path of Suns Audio Fiction + Q & A With Monte

"...Satyrine is vast, stretching for miles, although much of it is desolate. Perhaps once, long ago, its population numbered in the tens of millions. But today? No one could even make an educated guess. This is made more difficult still as many of the apparent inhabitants are thoughtforms rather than actual people. These magical constructs carry out many of the mundane tasks that make the city work.

Still, despite the ruin, the reclaimed and rebuilt sections of the city have returned somewhat to normal. Nobles strut and preen, artisans create and perform, merchants trade, and criminals steal. Probably much like it always has been.

Ruling over Satyrine, the three immortal, godlike beings known as the Deathless Triumvirate dwell both within and beyond the city itself. Each has a dual nature: one physical and in the city, usually within a massive citadel located near Satyrine’s center in the Marquis Quarter, and one far more ephemeral. It is possible—likely, even—that the Triumvirate is just a manifestation of Satyrine’s own life force and will. If this secret proves to be true, then it would not be incorrect to think of them as the mind and the city as the body. The cysts, then, are tumorous and the Triumvirate—that is, the city itself—wants them removed.

Nightside of the Blue Sun, Stats, and a Token of Appreciation

"These two are Miret Kollost and Mister Durance. Miret is an Established Flameheart Apostate who Dwells in Darkness. She's abandoned her corporeal form entirely except for her blood (her family ties are strong), but she uses clothing and a mask to interact with the world. Mister Durance is a Connected Stoneheart of the Order of Goetica who Cages Adversaries. He used magical compulsions on the demon trapped in his chest cage to learn where he could find that spiderwand. The two of them travel the Cyclone Road together to reach Castle Gnash and find the secret anti-diamond that can cleanse the stained 13th hour."

Dice and a Secret

One of the components of the Black Cube of the Invisible Sun game that we haven’t talked about much is the GM’s notebook, which we’re calling The Guiding Hand. It sounds, perhaps, like a blank notebook for GMs, but it’s much more than that. First and foremost, this is a tool for organizing your various plot lines. As I’ve said many times before, characters in Invisible Sun don’t advance in level or tier. They advance by moving, step-by-step, through one or more story arcs, each time earning a few points to spend on new capabilities, secrets, spells, and so on. But because each player has their own individual story arcs, it can be difficult for a GM to keep track of it all. Because of course the group will also have its own larger arcs and plots and stories.

So a game master has to have a way of measuring those story arcs. The GM notebook includes a way to manage all of that. But it’s even more than that. It will actually offer a lot of prompts and suggestions for how to organize these stories to keep them moving forward. It will include reminders of individual story points. You can almost think of it as a day planner for your campaign.

Lastly, GM notebook goes a bit further and offers ideas for new potential arcs and events that a GM can use or ignore as they like. For example, it might suggest that, if you have a player who really likes the idea of advancing in her order, now would be a good time to introduce a new story arc based on that by means of an invitation to dinner from someone higher in her order.

That’s why it’s called The Guiding Hand. It’s not a campaign, but a tool to help you create and manage one of your own. 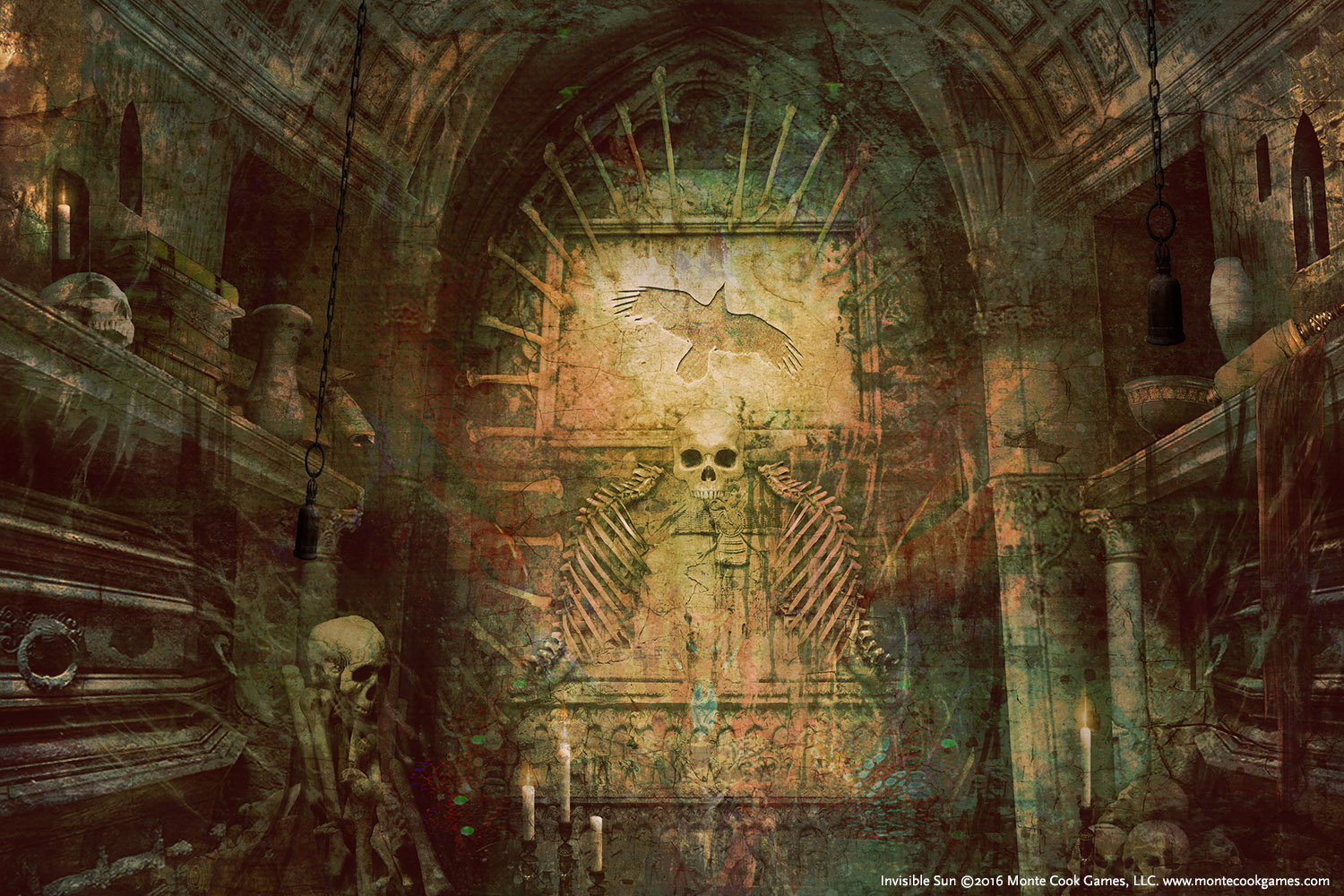 Invisible Sun, Numenera, The Strange, Cypher System- Yup We Are Talking To Monte Cook From MCG

The Black Cube is Ascendant

We have, very quickly, reached the goal where the contents of the box are once again upgraded. The four main books in everyone's Black Cube are now larger and hardcover (page count among them will be more than 500) and we are going to add another book: an art book. An exciting moment for all vislae, and we could not have reached it without each and every one of you. Very likely there will be noise complaints about the raucous party at Zero's. Again.

Charles Ryan is offering free copies of his novel in conjunction with this KS:

"The Mason of New Orleans

The offer is open to all!"

If we break our record ($517,255) by midnight EDT today, shoot a screenshot of your tweet/post to me on Twitter at @charlesmryan, and I’ll send you a copy of my novel in the ebook format of your choice. (It’s a supernatural historical novel that has pretty much nothing to do with Invisible Sun, but it’s 5-star rated on Amazon and is good and long, so at least you can kill some time while waiting for next November!)

Sounds good, but I was a little burned by Numenera and The Strange (system-wise, and mostly on the former). I'll be following this project closely, and there are certainly elements which have caught my eye, but $197 is a little much for me to pay for a mystery box, sight unseen. Shame on my aging cynical brain, I know.

Oftentimes what I like about Planescape is the layman's perspective it offers, the way the average Cager, from the lowest beggars to the factols themselves, doesn't stand in awe of the angels and demons and gods. There's a basic skepticism to the setting which I find endearing. Invisible Sun thus far plays so heavily on its mysteries that while I like what I've seen of the writing, the prose, the naming of things, it just hasn't clicked with me yet.

If they allow for latecomer backers during the dev process I reserve the right to change my mind.

They do have a Backer Kit process planned. Actually I found the mysteries of Planescape one of the most interesting aspects and even Faces of Evil - as well done as it was - disappointed me with making the Yugoloth Conspiracy hard canon. (OTOH it did get us the greatest story hour ever from Shemmy...)

I do think the $197 is high though, it's understandable not everyone will want to back.

"Known just as often as the Deeps or the Void, the Dark is existence without a sun. Lightless and cold, it is not just unknown, it is incapable of being known. It is the concept of nonbeing, the absence of everything found amid the Path of Suns...."

The complete listing of the information on the game given through updates:

I became aware of this a couple weeks ago and from all the research I've done, it looks very much like a cross between Amber and Planescape.

I should be getting my copy soon - will let you know how it feels/plays!

Regarding Invisible Sun, Jack of Tears wrote:
"it looks very much like a cross between Amber and Planescape."

I always found it somewhat odd that I have never encountered anyone else who ran a blended Amber/Planescape homebrew game, not even from people who are explicitly fans of both.

Regarding Invisible Sun, in the Amber novels (specifically Blood Of Amber and Sign of Chaos) do you remember when Luke was tripping on LSD and ended up in a surreal bar with a trump-like mural from which Carrollian monsters (a Bandersnatch and a Jabberwock) emerged? Now imagine that there is also a trump-like Salvador Dali painting in that bar, and you discover that the True Center of Existence is within that Salvador Dali painting; that would be the Invisible Sun game.

The multiple styles of magick in Invisible Sun are very intriguing.

I always found it somewhat odd that I have never encountered anyone else who ran a blended Amber/Planescape homebrew game, not even from people who are explicitly fans of both.

Turns out there's an old rpg called 'Lords of Gossamer & Shadow' which is basically this. Based on the Amber system and setting concepts, it follows the exploits of planeswalkers adventuring across the infinite staircase which connects all known worlds.

There are several 10-20 page world supplements with a few very good ideas to be found among them.

As for 'Invisible Sun', I found my ideas of what it could be, far more interesting than the product I actually received. I appreciate that it gave me some good ideas and I'll scavenge the material for salvageable content, but Monte has impressed me less and less with each recent release and this was the last straw. I won't be buying anything with his name on it, again.

Lords of Gossamer & Shadow, for intellectual property reasons etc., had to strip out Zelazny's iconic permutation of a Chaos/Order pantheon, which is dear to my mythology-loving heart, but it would be relatively easy to insert such [back] into LoGaS; for a LoGaS game to be ideal for me it would still need to be a LoGaS/Amber[/Mage] blend. The Infinite Staircase ties nicely into Planescape material though. Despite the absence of Zelazny's Chaos/Order pantheon, I would happily play in a LoGaS game.

Jack of Tears, can you give us an example of an interesting idea you had that Invisible Sun was unable to support?